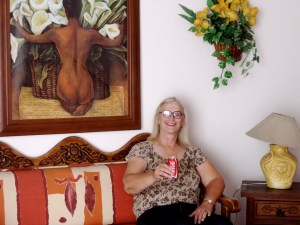 Enjoying a litle refreshment in a nook at the hotel 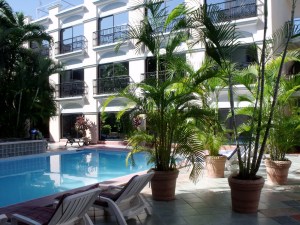 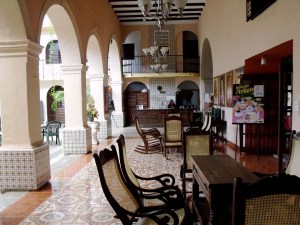 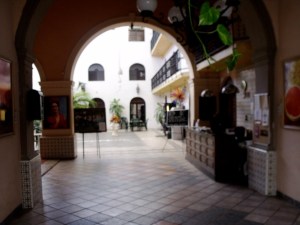 Reception foyer of the hotel 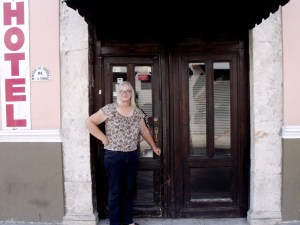 The front door
Nice hotel in the center of the city, best part is the dogs and
cat are with us in the room. 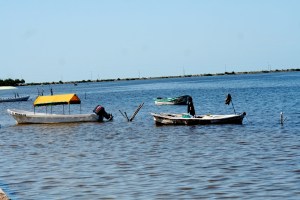 Boats in del Carmen where we had lunch 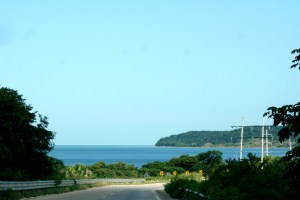 View on the way to Merida 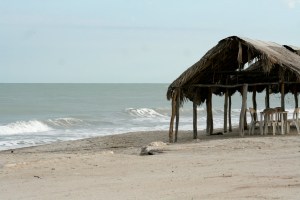 Palapa on the shore going to Merida 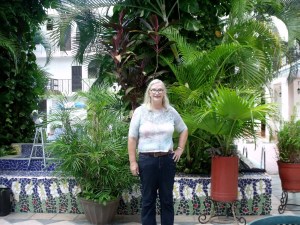 On the patio at the hotel
It was a long, long drive to Merida. The first city we stopped in was Tampico where we stayed at the Best Western had a nice dinner and nice breakfast. We then went to Veracruz where things went awray. We got there late and the GPS wasn’t reading correctly, but we didn’t know it at the time. we kept getting led around and around into the nightime traffic. We tried a few hotels on the beach but none would allow pets in the rooms. We, in desperation, rented a room in one of those hotels for lovers who needed privacy. The room came with a garage and they didn’t care if we had dogs or a horse for that matter and the price was right 300 pesos. We had pizza delivered and went to bed looking up at a mirrored ceiling. Neither Samantha nor I were amused.
The the following day we went to the city of Villahermosa. We got there early and past a few hotels, thinking there were more on the other side of the city we proceeded on through town. There were no other hotels and we didn’t want to try and return through town during rush hour traffic so we contiued on to del Carmen. That made for a very long day. We got to del Carmen after dark and found the Holiday Inn. The Holiday Inn doesn’t allow dogs in the room either so they stayed outside in the van all night. The next day we drove first to Compeche where we had lunch on the malecon (beach front walk) some nice shrimp and rice.
By that afternoon we had made it to Merida and to the Hotel Dolores Alba. It is a nice hotel with off street parking, laundry, and breakfast in the morning. We spent Sunday resting, shopping for food and laundry. Monday we plan to search for a place to rent.

Update on trip to Merida

It was a longer drive to Brownsville than I thought it and was boring. By the time we got to Brownsville and found a motel it was dark. We tried to find a restaurant off the GPS but it wasn’t where the GPS said it was so we found a Denny’s after trial and error. Just as we were finished with dinner the lights went out in the area. We waited for the electricity to come back on but tired of waiting paid our bill in the dark and went back to the motel.

In the morning we packed up and went to Walmart for a few last minute things, gassed up and got directions to the border. Before crossing we stopped and exchanged money then continued on to cross the border.
Crossing the border was almost a none event. We went inside the building just as you cross the border to find the immigration office and conducted business rather easily. Samantha decided to take some photos of the office and outside with the soldiers standing around and just as we got to our car an official came up to us and told us in spanish that we couldn’t do that and would have to delete the photos. We complied and departed with smiles all around. Then it got interesting.
We were trying to follow the GPS and we got lost and I didn’t see a stop sign and blew past it and had to turn around as we were going in the wrong direction. As we came up to the intersection where I had run the stop sign a man in a semi-uniform stopped us and gave us a talking to about blowing stop signs. He said he was a tourist guide and would direct us to the highway out of town and he did by getting in and showing us the way. We had a little excitement as we were stopped at a light about three cars behind the lead car and suddenly police trucks with lights and sirens going came out of all directions headed back from where we came from I counted at least a dozen trucks with police in back holding for dear life. It looked exciting, I wonder what happened. Shortly after we were on the road and our guide had us drop him off. Of course he needed to be compensated for his guiding and we were happy to pay him as were were headed for trouble for sure.
Then started the journey to Tampico, what a boring trip. The scenery was similar to the desert in Arizona and I had seen enough of that plus getting used to driving in Mexico was a bit trying. The way Mexicans pass on the highway is sort a dare-devil sort of thing. They pass on curves and pass long lines of cars with no problem. We finally got to the outskirts of Tampico and when I saw the sign for Best Western we pulled in and got a room then we went to dinner. We picked Maximo’s Buffet and it was pretty good a little more expensive than advertised but okay. We went back to the Best Western and set up for the night. I never asked if pets were okay, I figured it is better to ask forgiveness than permission. So far so good.
Tomorrow we head to Veracruz, let’s see what happens then.

I finally received the title for my van and today I went to the Mexican Consulate in Dallas and with no problem at all got the vehicle sticker. I also got Mexican auto insurance. Earlier this past weekend I got reservations at a hotel in Merida. It now feels like things are working towards a good trip. I was worried about the temporary import trip sticker as the title took its sweet time to arrive from Texas DOT. Without the title it is questionable one could get the sticker, no sticker your not bringing that vehicle into Mexico and if you do you could lose it.
We have the sticker, the insurance, and a place to stay so far so good.

I started sorting stuff to take to Mexico. I have two boxes now one with food stuff, canned goods etc and one of books. The books are mostly on learning Spanish. I hope they will do me service when I get to Merida. I have studied over and over and still don’t feel confident with Spanish. I know I speak it like a Gringa in a bad movie I screw up the tenses, word order and use inappropriate terms or forget how to say things altogether. (Sigh)
I stopped by the cardiologist’s office today and got new prescriptions for my medications so I can get refills before I leave and take three months supply with me. Hopefully that is how it will work out for me.
I stopped by my mechanics place this afternoon and had him show me how to open the cap on the power steering pump I had tried to open it, but the darn thing wouldn’t come off and I was afraid I would break it an then I would have to search for a new one in junk yard-not a happy thought. Joe the mechanic showed me that I wasn’t using enough pressure on it.
I called Dish TV today and seem there is no problem with suspending service when I leave which will be a good thing. I have the water company on auto pay as well as the mortgage and electricity so that is taken care of. Got to get the pets up to date on their shots and get a certificate to take with us to the border just in case we get checked. Hopefully the local Vet will cooperate.
There is still a list of things to do some can only be done just before leaving for Mexico. Hope I don’t forget anything.