I took a day off

I had breakfast here at the hotel and I went to the corner store and bought some laundry soap and used the hotel’s machine to do load of laundry. Of course the machine’s directions are in Spanish and I didn’t have a clue how to operate the washing machine a young man who works here came over and set the machine up for me. He also cleaned the lint out of the drier so it would be ready for my clothes. By the time my clothes were done I was ready to go for a walk and do some shopping.

About nine blocks from the hotel is a shopping area there is a whole street blocked off and at either end is a plaza. The area was crowded with shoppers and there are stores of almost every description. I saw some ladies go by with a big dish of ice-cream with chocolate sauce on it and sprinkles and all of a sudden I wanted one. The ice-cream stand was very close and I resisted the temptation to get the same size as the ladies had and settled for the smaller dish. I found a bench to sit and enjoy the dessert and watch the people go by. It is very nice that there benches conveniently located in shopping areas here it keeps the shoppers rested and gives the locals a place to watch the comings and goings.

I did a little shopping myself. I got some goodies to take back to the hotel to munch on and I bought a pretty gold scarf and some silver-colored earrings. I thought the prices were reasonable. I also had lunch; a Greek Salad and a soda. I think I’ve been neglectful of eating veggies lately and I hope the salad makes up for it. When I came across a coffee Cafe I had a Latte and it was delicious I would like another.

I ambled on back to the hotel and left a plate of chocolate chip cookies at the front desk for anyone to enjoy the two youngsters manning the desk had helped me before and the helped themselves right away. I guess it is the Grandma in me I enjoyed doing that.

Here are a few photos; of the plaza at the end of the shopping area; 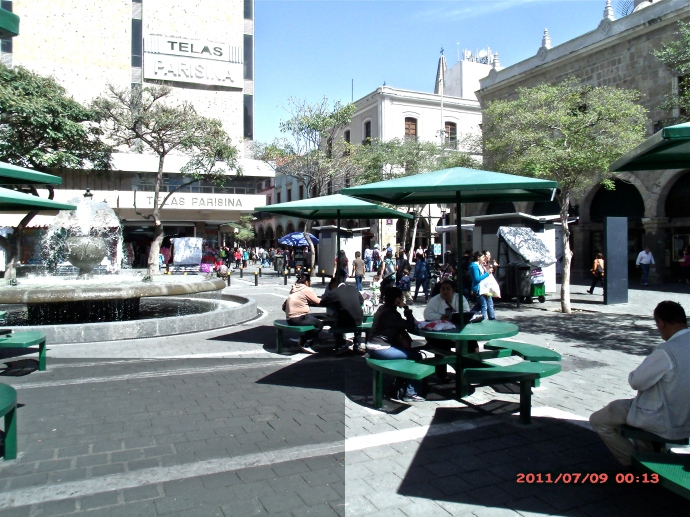